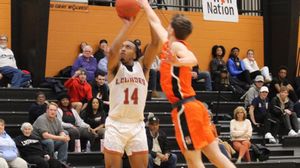 Anderson followed the three-pointer with a key block of a Warrior three-point try on the ensuing possession, which allowed the Gray Wolves to take the three-point lead Joey Holifield (Toledo, OH/Cardinal Stritch HS) Free throw. Indiana Tech drove to the basket and reduced the deficit to one, 83-82, with 15.1 seconds to play before Holifield made two more free throws with 9.0 ticks to play. Indiana Tech made a free throw with 3.2 seconds on the clock, but that would be the bottom line.

“Little hit a big three followed by the block,” head coach Dennis Hopson said afterwards. Those were two big plays. You should get plays like this from your seniors, and that’s exactly what he did.”

Indiana Tech (15-3, 8-2 WHAC) led most of the first half by up to 13, 30-17 with seven minutes remaining. The Gray Wolves were able to make a run and reduce the deficit to two, 34-32, after two consecutive three-pointers Cliff snow (Middletown, Ohio/Middletown HS). Indiana Tech would go into the break with a 42-37 lead.

In the second half, the Warriors pushed the lead back to 10, 49-39, just 2:35 from the locker room before Lourdes scored eight straight points, capped by a three-pointer by Jackie Harris (Toledo, Ohio/Saint Francis de Sales HS). A tip from Snow after a miss then gave the Gray Wolves their first lead in 4-2, 56-55, with 12 minutes to play.

The Warriors responded, reclaiming the lead and extending it to eight with less than five minutes remaining, 74-66 before Lourdes made his late comeback.

“That was a great win” Hopson added. “We replied tonight. When they hit, we hit back and didn’t back down. I’m proud of how the boys fought.”

Holifield finished the game with a game-high 30 points and made 11 of 14 from the free throw line while Snow came off the bench and added 18 points. Harris added 13 points while Anderson and Stephen Coleman Jr. (Toledo, Ohio/Hillcrest Prep HS) each scored 11 points, giving the Gray Wolves five double-digit goals.

Blake Davison led Indiana Tech with 18 points while Josh Kline added a double-double with 17 points and 11 rebounds, including eight on offense.

Lourdes (13-5, 7-3) starts the second half of league play on Saturday afternoon and meets the University of Michigan-Dearborn. The game is scheduled to be played at the Allied Alliance Credit Union Arena on the campus of Madonna University in Livonia, Michigan, with tip scheduled for 3:00 p.m