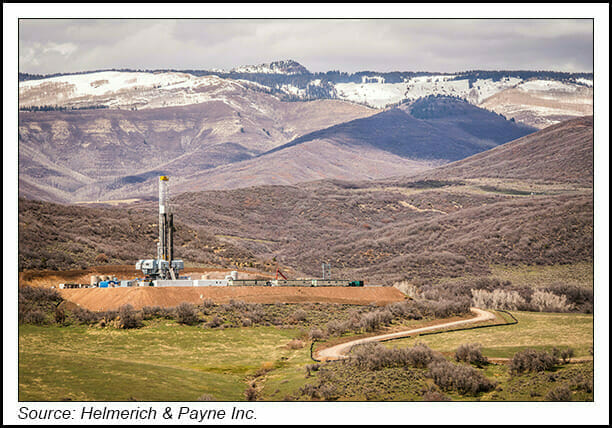 “We’re beginning to see economic returns at levels not seen since 2014,” Lindsay said during the company’s fiscal fourth-quarter earnings call earlier this month. “As such, we believe there is significant momentum heading into fiscal 2023,” he reiterated his comments made in October.

“In my 35-year career, I have never experienced a higher level of alignment and communication with our clients, resulting in greater transparency and value creation,” said the CEO.

H&P saw its results “improve significantly quarter over quarter as price increases and better contract economics took hold across a larger portion of our FlexRig fleet.” FlexRigs are the top-end, super-spec rigs that are more in demand.

Over the past six months, “Demand for FlexRigs has been primarily met with readily available Hot Rigs” that have completed work in one area and are operational. “This allows us to defer the investment of bringing a drill rig off the stack and thus exercise capital discipline,” said Lindsay. “The takeaway is that the majority of customer demand over the past few quarters has been satisfied by rig migration rather than rig reactivations.”

H&P defines churn as the situation where a rig is released by one customer and then contracted out to another customer within a “commercially reasonable timeframe,” which allows the rig to sustain a high level of activity, he noted.

For the drilling rigs to be reactivated in North America, H&P requires contracts with a minimum term of two years. In the past week, H&P has already handed over two-thirds of its reactivated rigs to large, publicly traded exploration and production companies.

“As in previous years, we expect our 2023 rig additions to be weighted in the first half of the fiscal year and anticipate there will be one additional contract change later in the year,” Lindsay told investors. “Strong customer demand coupled with renewals of term contracts should continue to result in higher average price levels across the active fleet.”

In the North America Solutions segment, H&P contracted an average of 176 rigs in fiscal 4Q2022, up from 174 in 3Q2022, CFO Mark Smith said. “Revenues were $66 million higher sequentially due to price increases for our rigs in the spot market and continued life extensions.”

For the first three months of 2023, the North America Solutions segment has contracted 180 drilling rigs. H&P expects to have 181-186 implements ready by the end of March. By the end of June there will also be “line of sight for up to 192 oil rigs” in North America.

“We anticipate average daily revenue for our rigs to be in excess of $30,000 per day for the fiscal first quarter,” Smith said. “We continue to expect the share of the U.S. fleet maturing through the end of fiscal 2023 to be between 50% and 60%.”

The International Solutions segment is also gearing up for “substantial growth in the future,” said the CEO. “We see opportunities to bid on areas of existing operations,” as well as from new customers.

H&P also sees more drilling opportunities for the FlexRigs and digital technology in areas beyond oil and gas.

H&P completed drilling for a pilot project for an enhanced geothermal system in Nevada in September.

These were the first two horizontal geothermal wells ever drilled in the United States, Lindsay said. Another geothermal pilot project is underway in New Mexico.