Cory Henn was an Iraq War veteran with a career in the New Mexico Corrections Department when he decided to pursue a computer programming degree. After about a year and a half, he majored in biology there and found his passion by transferring to the University of New Mexico to study biology full-time.

A native of Pennsylvania, he joined the United States Air Force at age 17 under the delayed entry program and completed his basic training after graduating in 2001. He chose a career in security forces that gave him the opportunity to work with guns and gain law enforcement experience. He was stationed at Kirtland Air Force Base in Albuquerque and worked in a variety of roles from nuclear and aircraft security to patrolman. In 2003, Henn was deployed to Iraq in support of Operation Enduring Freedom/Iraqi Freedom and then completed his Air Force tenure as a base patrolman and member of the Emergency Response Team. He left the Air Force in 2005 and quickly found a job with the New Mexico Corrections Department.

Henn spent two years as a correctional officer at the New Mexico Penitentiary in Santa Fe. He joined the Corrections Emergency Response Team and was trained in high-risk situations. He was then made an officer in the Security Threat Intelligence Unit, working on gang investigations both within the prison and with the New Mexico Gang Task Force. After two years, he returned to the prisons as a sergeant and took on an instructor role on the emergency response team. In 2014, Henn was hired again, this time to a leadership position with the New Mexico Correctional Authority, where he worked on recidivism reduction initiatives and helped promote training opportunities for offenders.

“My 12 year old son Aiden is my absolute motivation and inspiration in life. It’s hard sometimes but he’s always supporting me and giving me the little words I need to keep me going. I don’t know where I would be without him and he’s a big part of why I worked so hard to finally get my education.” – PhD student Cory Henn

“My areas of interest are mucosal and neuroimmunology. I am fascinated by the immunological interactions between the gut and the brain,” says Henn. Research has shown that there are links between gut bacteria and changes in the brain, and Henn hopes his work will help find a cure for Alzheimer’s disease. 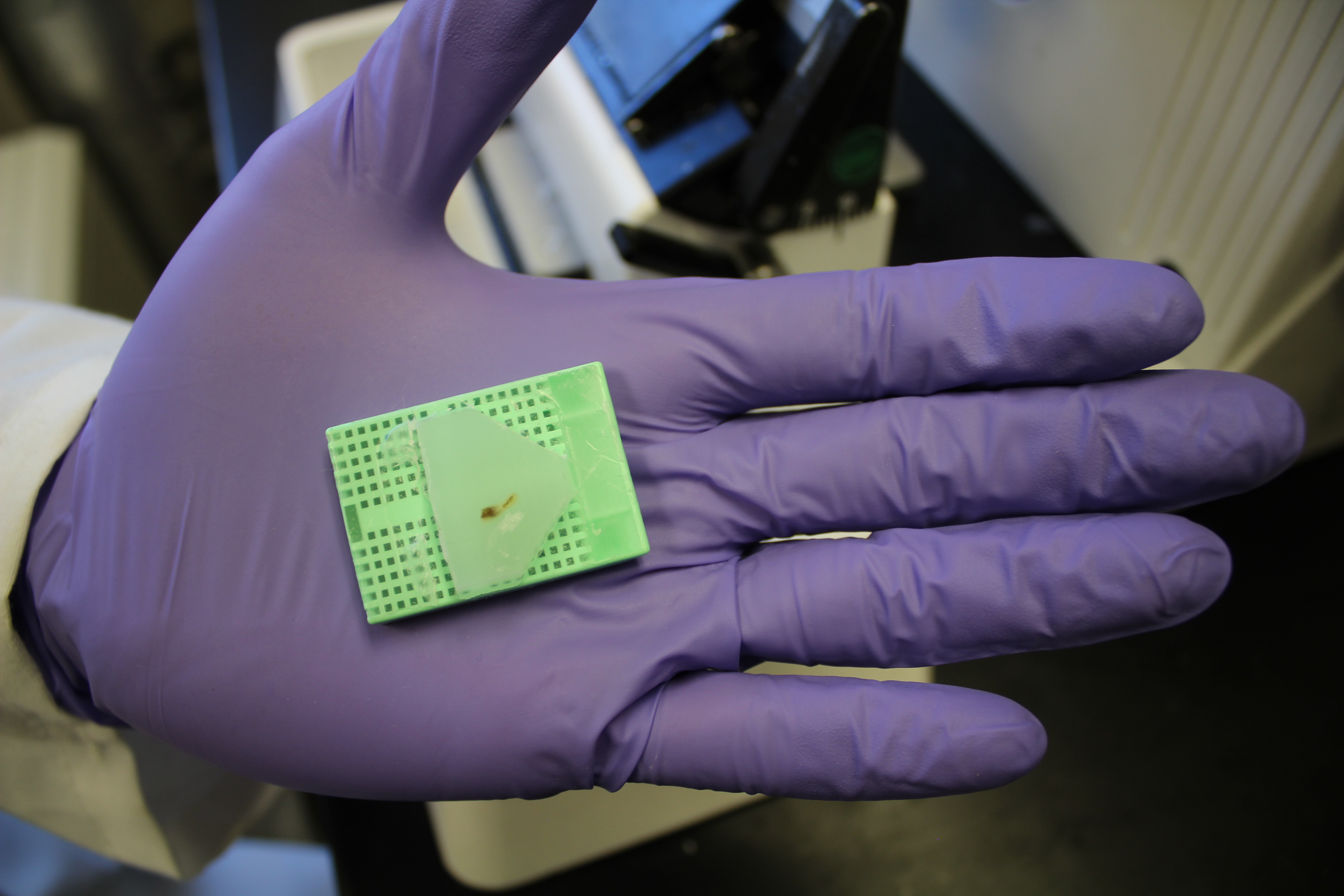 Showing a tiny section of a mouse colon on a microscope slide, he explained: “My current project is investigating the interactions between the gut and the brain in neurodegeneration. In our model we investigate the relationship between enterobacterial infections and neurodegeneration. We are also closely examining the relationship between enterobacterial infections and the enteric nervous system, the nervous system of the gut.”

“This project, funded by the National Institutes of Health, is the only mouse project that we have in the lab right now,” Salinas said. “[Research assistant professor] Elisa Casadei and Cory have been leading this project for several years now. The aim of the project is to understand the role of tau in the gastrointestinal tract and how it contributes to neurodegeneration in the brain.”

According to the NIH National Institute on Aging, tau normally binds to and stabilizes microtubules in the brain. In Alzheimer’s disease, however, abnormal chemical changes cause tau to detach from and attach to other tau molecules, resulting in the tangles in the brain characteristic of the devastating disease.

Henn plans to continue to focus on computational immunology while completing his Ph.D.

“I hope to learn how to use agent-based modeling to characterize the complex interactions of the immune system in terms of mucosa and neuroimmunology. I’m not sure yet whether I want to stay in academia or switch to industry after completing my PhD. I just want to do good science and make a difference, but I’m not sure what that means for my career yet.”

“Cory’s past experiences make him a very different student. He is very passionate, very grateful for all the opportunities and being in a positive learning environment. He is also very good at juggling many different tasks and is a great communicator. We have a very open and healthy mentor-mentee relationship,” noted Salinas.

As a single father, Henn realized how important his son is to his journey as a student.

“My 12 year old son Aiden is my absolute motivation and inspiration in life. It’s hard sometimes but he’s always supporting me and giving me the little words I need to keep me going. I don’t know where I would be without him and he’s a big part of why I was so committed to finally getting my education.”

UNM helped Henn achieve his goals as a student through the department’s honors program. This program enables motivated students to pursue research and gain laboratory experience.

“Through the honors program in biology, I was given the opportunity to work with Dr. Salinas, a leading mucosal and evolutionary immunologist. She was an amazing college advisor who challenged me every day to get out of my comfort zone and do good science. My experience was so rewarding that I decided to stay with her to complete my Ph.D. UNM still helps me to achieve my goals today, through an residency that gives me the opportunity to continue my research and teach students.”