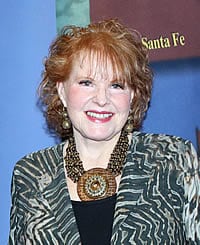 She knows everyone in New Mexico, or at least a few thousand real or wannabe-someones – and they always pick up when she calls.

And that’s just the locals; We’re not even talking about her friends around the world who write books, act in films, or have films made about her life.

Which begs the question: What on earth is Mills’ secret? Better yet, how do you describe or explain the unique charm of Report from Santa Feher weekly interview show that airs on the state’s public television networks?

Assuming your house has electricity, you’ve probably watched a million one-on-one interviews over the years — from old-school heavyweights like Mike Wallace, Barbara Walters, and Bob Costas to (God help us) the invasion of hairy Yahoos that populate cable news , as if television spawned a leak of lunatics.

Instead, she’s… well, Lorene Mills, the 77-year-old grand dame of the State Capitol Building whose bare bones, warm, motherly smile, and willingness to let her subjects gossip about it sometimes reveals nuggets you might not get elsewhere.

Once she says Hollywood star James Cromwell (Babe, LA confidential) exclaimed on her set. Mills cried with him.

“It’s just not in my nature to do an ambush interview or a hostile interview,” she says. “I mean, I’ll gently point things out to her; the velvet hammer. … You are in someone’s living room. You don’t want to have a fight in her living room.”

Mills’ battle armor, if you want to call it that, is a genuine interest in people and the things that matter most to them. Could be the governor. Might be a backbench lawmaker from Truth or Consequences. Could be a guest star. Could be an author, a self-promoter, a collector (or all three in one: she once interviewed the late and talkative Forrest Fenn).

The name on the business card does not matter. Mills prepares for interviews, about 48 a year, the way quarterbacks study a movie before a Super Bowl.

For the famous poet Margaret Atwood, she consumed 14 of her books.

“I make my living off coffee,” says Mills. “It’s probably not for the best, but it excites me.”

Amped or not, Mills has been around for so long that there’s a whole generation of viewers who don’t know anything about the guy who got them into it.

Lorene’s late husband, Ernie Mills, a longtime state newspaper and television journalist, was the Grand Dude of the Roundhouse for many years; a former newspaper editor who branched out into radio and television. During the horrific 1980 New Mexico prison riot near Santa Fe, he played a role in the release of some hostages taken during the nightmare.

Ernie died of pneumonia in 2003, and Lorene, who had worked with him on the show and other formats and sometimes acted as his editor, producer and cinematographer, took over the baton.

It was an easy transition; Lorene is a natural talent, if only because of her courtly appearance, her red hair and her natural curiosity. She interviews cantankerous and occasionally pompous Democrats and Republicans with equal alacrity – knowing perhaps better than most that in politics the distance between the penthouse and the annex in the Roundhouse is pretty small.

Longtime former lawmaker Dede Feldman, who has guest-starred on the show several times, calls Mill’s ability to pull substance from her subjects a matter of charm — and more.

“That’s not the right quote or anything, but she could be, you know, some kind of caring southern belle on Tara’s porch, interviewing General Lee and asking him very polite, disarming questions,” says Feldman. “I think disarmament might be the right word for it.”

Last but not least, Mills brought compassion, or at least a willingness to listen, into the approach. She says her first interview after Ernie’s death was at Gov. Bill Richardson, good catch. But she doesn’t just focus on the headliners. She’s somehow found enough to talk about with a variety of people who aren’t exactly A-1, A-block material. But they are New Mexico.

She says she still loves the job, the role, the legacy, carrying on for her late husband who was trying to shed light in dark corners. She’s excited about an upcoming interview with former Senator John Arthur Smith, who once chaired the Senate Treasury Committee — and thus the state budget — when New Mexico wasn’t awash with oil money.

Smith may be old-fashioned, but he has insight. It’s the currency Mills values ​​the most.

She has no intention of retiring; not now that it’s so interesting. She spends less time in her little place at the Capitol, but when she needs something or someone, all she has to do is call and an interview suddenly materializes.

“I see no reason to stop,” she says with the gentleness you’d expect from Lorene Mills, but with a crackling crackle that stimulates the mind.

Phill Casaus is editor of The Santa Fe New Mexican.